Read the full story below, which first appeared in Green Lodging News. 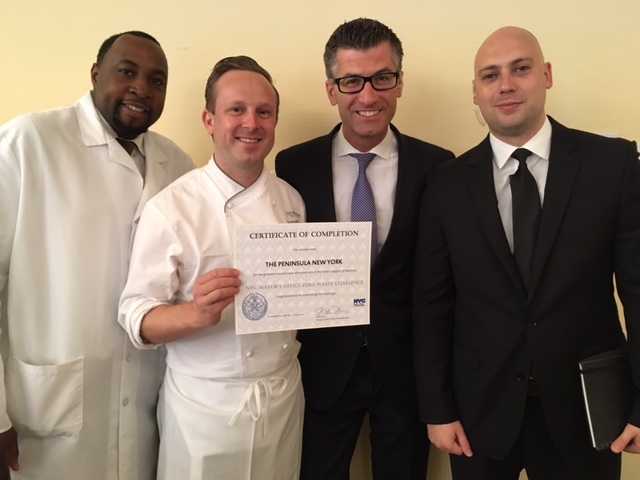 The results of the New York City Mayor’s Zero Waste Challenge were recently revealed, with The Peninsula New York emerging tops in the hotel category. The Peninsula was able to double its diversion rate in just a few months during the Challenge, in the process, emerging as a role model just in time for New York City’s new commercial organics rule.

Beginning July 19, 2016, certain New York City businesses are required by law to separate their organic waste for beneficial use (composting, anaerobic digestion or other). Among those affected are food service establishments in hotels with 150 or more rooms, like the Peninsula New York.

Food waste is a big contributor to overall waste. Great Forest participated in the Mayor’s Zero Waste Challenge as a consultant, helping The Peninsula and other companies reach their goals.

According to the USDA, about 31 percent of food in the United States is never eaten. So addressing food waste is key especially for businesses in the hospitality industry. Donating, composting and processing food waste can make a big impact.

Lessons from The Peninsula New York’s win offer useful insights into how hotels and other businesses in the hospitality industry can deal with the food waste issue. For establishments in New York City, the following guide can be used as a simple roadmap for staying in compliance with the new rules.

Results of the Challenge Provide Roadmap For Hotels

The Peninsula was among some of New York City’s most iconic businesses and institutions that took up the Mayor’s challenge of cutting its waste. A total of 31 different businesses across all five boroughs joined the effort.

“The Mayor’s Zero Waste Challenge resulted in the total diversion of 36,910 tons of material from landfill and incineration, which results in an enormous environmental benefit to our city,” said Sarah Currie-Halpern, Program Lead for the Mayor’s Zero Waste Challenge. “Great Forest played an important role in helping participants like the Peninsula New York reach a 66 percent diversion rate…It’s organizations like these that are helping forge the way to the city’s goal of zero waste to landfill by 2030.”

So How Did The Peninsula New York Do It?

One of the first things the team did was to conduct a waste audit to evaluate their current situation.

“In fact any company interested in pursuing zero waste, or wanting to evaluate their waste programs, should do a waste audit. This provides a detailed account of what is going into your waste and recycling streams and allows you to set benchmarks and goals. With a comprehensive audit, you know where your problems are and how to start fixing them,” explained Ross Guberman, CEO of Great Forest.

Next, they formulated a plan, based on what they learned from the waste audit.

“The Peninsula was already doing a good job recycling, so we assisted with simplifying and fine tuning their existing recycling program. But they did not have a system for dealing with organics, and we knew that was what we should target to expand their efforts,” noted Shenkman.

There are multiple ways to deal with food waste. Businesses have to choose what works best for them, depending on the type of organics they generate, the space they have, their location, and other variables.

For The Peninsula, Great Forest worked with the team to evaluate the multiple new food waste technologies available, and helped them select the system that was best suited to their location and needs.

This led to the installation of an Orca machine, with staff training to ensure correct use of the new food waste disposal technology, which digests food waste on-site, transforming it into safe, clean waste water that goes down the drain.

(Which is right for you? Get the Great Forest Guide to New and Emerging Food Waste Technologies.)

To ensure the new program worked properly at the hotel, Great Forest conducted educational training sessions, and even met with management and employee unions involved to make sure everyone was on board with the new system. Even the best recycling program or technology cannot guarantee success if there is no buy-in and cooperation from staff.

The team also adjusted the hotel’s existing waste and recycling program to accommodate the new food waste technology. They added more bins to collect the organic material, made sure containers were properly lined, and that all bin locations had clear signage and instructions.

With the new system in pace, Great Forest performed regular waste audits to help the hotel track the amount of waste and recycling diverted, providing reports to the Challenge, and ensuring that the new system was working properly.

“By fine-tuning their existing recycling and waste program and expanding it to include organics, The Peninsula is now ahead of the curve in compliance with New York’s new organics law. And they did it in just a few months,” said Maya Shenkman, director of hotel services for Great Forest. “And because they are now sending less material to the landfill, their waste removal cost may be renegotiated down. While this potential savings is a plus, what’s more important is that their new recycling and waste program is now more effective, leading to smoother daily operations.”

And best of all, the improvements will continue. The team expects the amount of material diverted from landfill and incineration at the hotel to go up even higher as the new system settles in.

Read Next – The Glass Recycling Problem