Making a Difference: Cleaning Up A Former Soviet Arms Site Sitting On Top Of a Forgotten “Bomb” 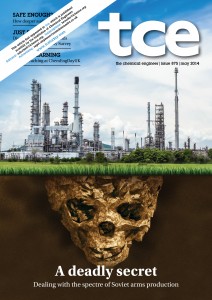 Just how hard is it to clean up a toxic polluted site sitting on top of a “bomb,” at a secret site?

This month’s TCE magazine features the story behind Pure Earth/Blacksmith Institute’s work dealing with one of the most dangerous examples of legacy pollution – the toxic remains of Soviet arms production.

In a former Soviet town, a secret chemical factory sat abandoned for more than a decade with hundreds of drums of leaking toxic chemicals near tons of explosives. The plant was a toxic dump on top of a forgotten ‘bomb’ in the centre of a city housing 290,000 people. It had all the components and potential for a historic and horrifying industrial accident.

Read the rest of the story, a first hand account by Andrew McCartor, Pure Earth/Blacksmith’s program director for Eastern Europe and Central Asia.

This entry was posted in All, Making a Difference. Bookmark the permalink.
Blog Home