Get the Message with Big Green Statements

* Read the article in Environmental Leader 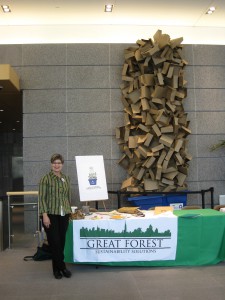 No matter how many educational sessions you hold about recycling and conservation, and how many fact sheets you give out about sustainability, sometimes you just need to make a big visual statement to get the message across loud and clear.

On Earth Day this year, tenants at a high-rise office building on Washington Boulevard in Jersey City were greeted with an unforgettable sight when they arrived at work – a 20-foot high towering sculpture made out of hundreds of cardboard trays sprouting up from a recycling container.  The “tower” was built in the lobby by Great Forest sustainability consultant Sandra Robishaw using a week’s worth of trays from the building’s cafeteria that were discarded instead of recycled. The floor-to-ceiling sculpture made a big visual statement about waste and recycling that was hard to miss.

Across the river in Manhattan at a building on Fifth Avenue, office workers arrived on America Recycles Day to find a “lake” made up of about 160 bags of recyclables across the lobby floor.  The “lake” of bags represented one day’s worth of recyclables collected at the building. Great Forest sustainability consultants stationed next to the “lake” answered questions about the display and held a contest for office workers to guess the total weight of the bags.  Out of 125 entries, three came the closest to the actual weight of 1230 pounds.

It can be hard to capture the attention of the average employee in large office buildings. Great Forest has found that these big visual statements help reinforce green thinking and behavior. Both the “tower” and “lake” succeeded by sparking lively conversations about recycling and waste among the buildings’ tenants, leaving a lasting impression.

Aside from the fact that they help “cut through the clutter” of all the sustainability messages vying for attention, these big statements encourage a shared sense of responsibility.

Confronted with the “tower,” tenants suddenly understood the scope of waste resulting from their collective inaction. They could see that they were sending a tower-high amount of recyclable trays to the landfill each week. It wasn’t that the problem wasn’t visible before – for months, the garbage bins in the cafeteria were filled with trays that were discarded instead of being set aside for recycling. Rather, the dramatic display simply put the problem into full focus.

In the case of the “lake,” tenants were made aware that their collective recycling efforts resulted in over 1000 pounds of diverted waste each week.  The “lake” was powerful visual evidence that their actions made a real difference.  The “lake” was an acknowledgment of their achievement.

Columbia University professor Elke Weber, who conducts research on environmental decision-making, put it this way in a 2009 New York Times report on the green brain:  “cooperation is a goal that can be activated.”

Weber’s research shows that group involvement encourages decisions that are better for the community as a whole.  So an individual who may not be motivated enough to recycle on his own is more likely to do so as part of a group.

While more traditional forms of green education like signs and leaflets speak to people individually, big visual statements shout their message to the collective group, making them more powerful and effective motivators.

But this does not mean that green professionals should forsake smaller efforts like signs and leaflets. Rather, big statements have to work hand in hand with small statements to make their message work.

The person motivated by the message of the cardboard tower, for example, is more likely to take the next step and look for opportunities to recycle that tray.  This is where small, consistent messaging comes in.  The large display may be what triggers that ‘a-ha’ moment, making the mind receptive to day-to-day recycling instructions and notifications, including signs, leaflets and reminder emails.

Follow your big statements with small ones that reinforce and remind with detailed how-to instructions.

Big statements do not cost much to create since much of the material is already at hand. You just need to do a little planning.  Consider constructing a big green statement as a centerpiece for events like Earth Day or Climate Week when it will reap the most attention.  Just one or two big statements will support your everyday sustainability efforts year round.

This entry was posted in All, Events, Great Forest Insights and tagged displays. Bookmark the permalink.
Blog Home