What Are your Corporate Values? Can They Save The World?

As we enter a new year and decade, it may be time to ask if your corporate values align with people and the planet. 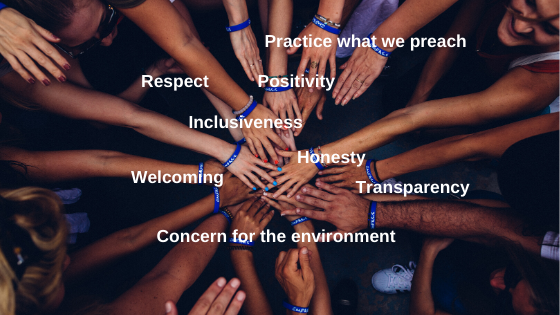 The landscape for doing business is changing and corporate culture is just beginning to catch up.

In August 2019, nearly 200 chief executives of the Business Roundtable, representing some of the world’s biggest companies, issued a statement on the role of business in society, pointing out that the long-held view of shareholder profits above all else may be seriously out of step with the times.

We see the winds of change in the rise of Swedish climate activist Greta Thunberg, who was just named Time magazine’s person of the year. Her achievement? Inspiring millions of people around the world to demand action and accountability from business and world leaders.

How companies respond to the challenges ahead depend in part on what their corporate values are.

Even a one line guiding idea can have so much impact on corporate behavior.

Remember the uproar when Google changed its motto from “Don’t be evil” to “Do the right thing”? The question that has remained on everyone’s minds is: do the right thing… but for whom?

Great Forest has never had a constant motto, but our corporate culture was defined by something that happened 20 years ago.

At the time, Great Forest was just a young, sustainability upstart shaking up the waste and recycling industry. We were helping companies and organizations adopt a sustainability mindset, implement strategies to reduce waste and their impact on the environment, and divert as much material away from the landfill as possible.

But we realized that even as we succeeded in making a sustainable difference in how businesses operated across the U.S., it was not enough. Around the world, many small, informal industries in poor countries (some of them making products for the global economy) were polluting the air and water, and poisoning people.

So in 1999, management at Great Forest set aside a portion of profits to launch the nonprofit Pure Earth (formerly known as the Blacksmith Institute) to clean up industrial pollution in poor communities. With our combined efforts, we now felt that a real impact was being made on the planet.

Our values guide us in all the work we do, but were not articulated until recently. At a company retreat, I asked staff gathered from Great Forest offices across the country to write down the values important to them. This is the list they came up with:

Even though we had no codified values, I realized that everyone working at Great Forest shared many of my values, and that these values were being expressed in the way we work with our clients, vendors and each other.

Our staff includes James Bernard in our San Francisco office, who has been passionate about reducing plastic waste since he was a child, when his glassblower grandfather made him a glass straw. And after decades in the hospitality industry as a chef and restaurant manager, David Troust, with our Mid Atlantic office, has been a vocal champion for food waste reduction and diversion. In our NYC office, Emilie Reinhard, a self-described empath, studied the social impacts of environmental policy in both Peru and Indonesia, and attended the UN’s COP21 climate negotiations in Paris.

“We’re in business to save our home planet”

I have the “Values” list tacked up on the wall in my office now, and I am working on getting it formulated into a company values platform to make it official. Our corporate values are, and must, continue to be our guiding light because they are what sets us apart.

Without values, Patagonia, widely seen as a sustainability leader, is just another clothing company.

A few years ago, a former Patagonia CEO donated 10 million acres of land to the Chilean government for five new national parks. Last September, Patagonia’s current CEO penned a plea (here on LinkedIn: “Enough is Enough: Join the Climate Strikes and Demand Action”) urging corporations and governments to take action on climate change. Their values set them apart. What are their values? Patagonia summarizes it in one line on their website: “We’re in business to save our home planet.”

ndividual and corporate values do matter. What are your values? What are the values where you work? Do they align?

This entry was posted in All and tagged Corporate Values, CSR, Values. Bookmark the permalink.
Blog Home